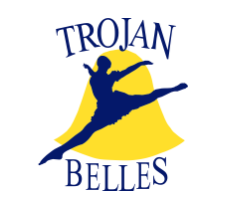 How Do I tryout for the Trojan Belles?
Current 9-11 graders who are students of Anderson High School are eligible to tryout for Belles. Students must participate in our PreDrill program the semester before tryouts in March.

What does it take to earn a spot on the Trojan Belles?
Excellent dance technique, grades and an attendance record that indicates ability to handle the additional responsibilities of Belles. There is no set number of candidates that will make Belles each year. To help prepare, the directors recommend taking at least one dance class outside of school, stretching every day, strengthening feet, and practicing turns and kick technique.
​
What happens next if I make the team?
If you make the Trojan Belles team, you join the "Newbie" Belles class, which is a class that each member must be enrolled in during the spring semester. Newbie Belles work during the spring semester on advanced dance technique, preparing for their role in the Spring Show, and learning several traditional Belles routines.

During football season, the Trojan Belles perform during the halftime show at every football game, as well as for school-wide pep rallies, and the Anderson High School Spirit Fest. The Belles also perform at two basketball games. The spring brings competition season, in which Belles perform in competition with other high-school dance teams from Texas and beyond. The Trojan Belles also stage a Spring Show every year, a professional-caliber production presenting many dance pieces, both solos and group dances. Every third year, the Trojan Belles take an out-of-state trip for site-seeing and special dance classes.

Trojan Belles also have opportunities throughout the year to perform community service of many types.

What else should I know about the Belles?
The Trojan Belles are a close-knit group. Girls not only become accomplished dancers, but also become close friends, while gaining qualities of leadership, participating in community service, and focusing on academic achievement. They learn values of respect, commitment, hard work, and supporting one another through it all. Find out more by asking a Trojan Belle or contacting a director!